Phyo Phyo Kyaw Zin presented her most recent work on the development of the PKS enumerator, a software to generate large libraries of macrocycles with user-defined constrains (she showcased a dataset of 10 million compounds). This work is done in close collaboration with Dr. Gavin Williams (Chemistry, NCSU) and has applications for the virtual screening of new bioactive macrolides for the development of new antimicrobials and agrochemicals.

Jeremy Ash presented his work on the first study using cheminformatics for the analysis and modeling of metabolomics data. The technique allows for a better identification of individual and groups of small molecule metabolites that can discriminate cancer patients versus healthy individuals. This is relevant for the development of disease biomarkers and precision medicine. 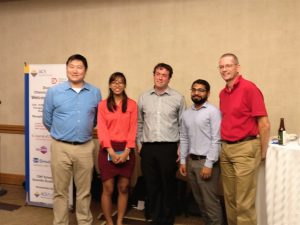 The Fourches group has developed the RealityConvert software tool and associated website, which allow users to easily convert molecular objects to high quality 3D models directly compatible for AR and VR applications. The ultimate goal of RealityConvert is to facilitate and boost the development of AR and VR contents for bioinformatics and cheminformatics applications. 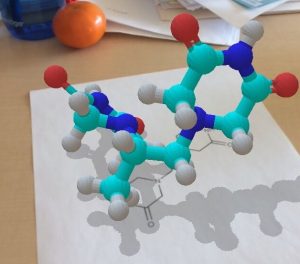 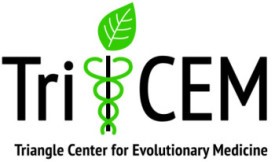 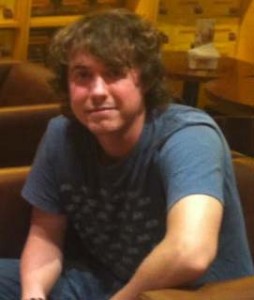 Jeremy Ash (Bioinformatics, Ph.D. student) recently received a fellowship for Fall 2017 from the Triangle Center of Evolutionary Medicine (TriCEM).   His proposed project is an extension of his recently accepted publication in the Journal of Chemical Information and Modeling on the use of molecular dynamics extracted chemical descriptors to characterize and model a series of ERK2 inhibitors.  The extension will focus on the evolution of resistance to chemotherapy drugs in mitogen activated protein kinases:

Kinase inhibitors represent the new generation of highly promising bioactive molecules for combating various types of cancer. With compounds already on the market and even more currently in clinical trials, the research community is on the path to developing a large collection of kinase-mediating drugs and chemical probes. However, drug resistance is the “Achilles heel” of kinases inhibitors. As members of signaling pathways that are critical to an array of cellular processes, kinase inhibition gives rise to strong selection pressure for drug resistance conferring mutations in patients. In this project, we focus on studying the ERK1 and ERK2 kinase, especially the dynamic interactions small molecule inhibitors undergo within the ERK binding site. To do so, we will rely on our novel modeling approach that integrates several state-of-the-art cheminformatics methods (molecular docking, molecular dynamics, and machine learning). We posit this analysis will deepen the understanding of why certain inhibitors interact differently with these two isoforms. This will help identify residues where the selection pressure driving drug resistance is different, and inform chemists of strategies to design new ERK inhibitors with greater efficacy. At last, our analysis of ERK-ligand dynamic interactions that confer specificity to ERK1, ERK2, or both will aide in the development of new chemical probes capable of more selective inhibition. 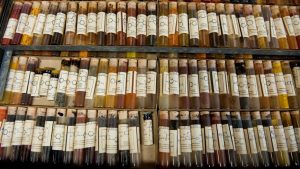 Researchers from North Carolina State University have released the first chemical “map” of dyes from the Max A. Weaver Dye Library, which contains almost 100,000 samples of unique dyes and fabrics. The information could assist researchers in developing dyes with desirable properties.

NC State analytic chemist Nelson Vinueza is working on digitizing and analyzing the library so that its contents are accessible to the public. “Each vial has the chemical structure written on it, so we must first digitize those molecular structures and then select candidates to do further characterization,” Vinueza says. “Obviously with a library of this size, the time and expense associated with characterizing each dye would be prohibitive, so we needed a faster, more efficient way to be able to analyze these dyes.”

Vinueza partnered with NC State computational chemist Denis Fourches to create a cheminformatics map of the 2,700 dyes that had their molecular structures already digitized. The computer models allowed the researchers to compare dyes with similar chemical structures and properties.

The cheminformatics analysis also enabled the identification of 150 chemically unique dyes representative of the library. In order to assist researchers in developing dyes with desirable properties, these sampled chemical structures are now publicly available in the ChemSpider database (www.chemspider.com/DatasourceDetails.aspx?id=900). “There are 58 million chemicals in the ChemSpider database, and 143 of the dyes have completely unique chemistry, which is really fantastic,” Vinueza says.

“We believe that this addition can prove invaluable to researchers who are looking for particular characteristics in these chemicals, such as antibiotic or anti-cancer properties, or for dyes that absorb light in ways that could lead to better solar-cell technology,” Vinueza continues. “This dye library could prove invaluable in creating cutting-edge solutions to problems ranging from human health to the environment.”

“The chemical maps and the other cheminformatics modeling techniques we used here provide a cheaper and faster way to screen for chemical dyes with the desired properties,” Fourches says. “Doing that same analysis by experimentally characterizing and testing all samples in a lab would take decades.

“And since these dyes were constructed sequentially over time, it is straightforward to pinpoint where structural changes led to properties of interest. We actually show that small modifications of the dyes’ chemical structures can lead to dramatic changes of their properties. This library is a real treasure trove for chemists.”

The rest of this article can be found here

New computer models from North Carolina State University show how a variant of a common protein involved in human immune response binds to the antiviral drug abacavir, causing a severe reaction known as the abacavir hypersensitivity syndrome (AHS). The work has implications for Personalized Medicine by predicting adverse reactions caused by existing drugs and future drug candidates in sub-populations of patients. 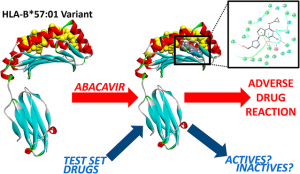 Full article can be found here

Recently the BRC was featured on both the College of Sciences website and the main NC State University website for the groundbreaking work being done through the Bioinformatics cluster.

The Bioinformatics cluster is part of NC State’s groundbreaking Chancellor’s Faculty Excellence Program, which aims to put faculty together, both physically and intellectually, to combine ideas and experience in ways that solve big problems. Faculty clusters and interdisciplinary work have become hot topics in higher education around the world, but this “new” interdisciplinary approach has actually permeated science for centuries.  NC State’s program, focusing on assembling groups of faculty with complementary areas of expertise to study interdisciplinary research challenges, was one of the first major initiatives Chancellor Randy Woodson announced after coming to the university in 2010.

To read the article in its entirety, please visit the College of Sciences website here: https://sciences.ncsu.edu/news/the-proximity-principle 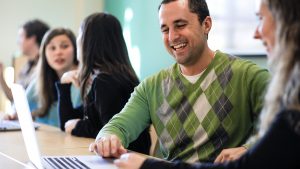 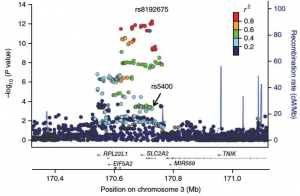 Drs. Daniel Rotroff and Alison Motsinger-Reif, in collaboration with the international Metformin Genetics (MetGen) Consortium, have uncovered new genetic evidence of how the benefits of the world’s most commonly used Type 2 diabetes drug, Metformin, may vary between individuals. Metformin is the first-line antidiabetic drug and has over 100 million users worldwide, yet its mechanism of action remains unclear. The study conducted a genome-wide association study (GWAS) that identified a genetic variant in the gene encoding the glucose transporter GLUT2, a protein that plays an important role in transporting glucose inside the body. They showed that those people who carried this variant had reduced levels of GLUT2 in the liver and other tissues resulting in a defect in how the body handles glucose. Metformin acted to specifically reverse this deficiency resulting in a better response to metformin in people carrying this gene variant. This is the largest precision medicine study on an anti-diabetic drug performed to date, and represents an exciting step towards personalized therapy for Type 2 diabetes.

The entire publication can be viewed here: https://www.ncbi.nlm.nih.gov/pmc/articles/PMC5007158/

Please help us in congratulating Jeremy Ash (Bioinformatics, Ph.D.)who recently won second place in the competitive Nvidia ACS COMP poster contest.  His work is relevant for the development of extremely predictive QSAR models needed for lead optimization, which is of great interest to pharmaceutical companies for modeling technology. Congratulations, Jeremy!!

Introduction To Linux (Dr. Galen Collier) – Wed., June 8th
This one-day short course offers a brief introduction to command-line operations using the Linux operating system. The primary objective is to provide you with beginner-level familiarity accessing and using a Linux system for common research computing tasks.
Introduction To R: Practical Bioinformatics (Dr. David Reif) – Thurs., June 9th
This one-day short course is an introduction to the R language for Bioinformatics applications. The main learning objective is to introduce practical coding skills that will allow you to perform basic Bioinformatics tasks and interact with popular tools/applications. These tasks include the creation, extraction, and manipulation of large data sets; the basics of graphics and visualization; and the automation of analysis using scripts. You will develop skills to perform these tasks in the context of practical application vignettes. Previous coding experience is not necessary.
Expression Analysis (Drs. Steffen Heber, Alison Motsinger-Reif, Fred Wright & Yi-Hui Zhou) – Mon., June 13th & Tues., June 14th
This two-day short course will cover basic concepts of gene expression, including analyses of microarrays and of transcriptomic sequencing.  The basic principles of differential expression testing, multiple hypotheses, and false discoveries will be covered.  Specific other topics include: the principles of pathway analysis and the utility of genomic annotation; alignment and calling of sequence-based methods, using tools such as tophat, cufflinks, and cuffdiff; and tools for RNA sequence analysis, including the negative binomial model, edgeR, DESeq. CAMERA-ROAST-Voom for pathway analysis.